The driving forces of cell division 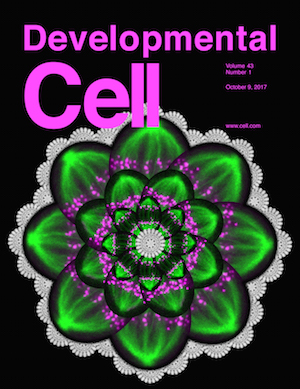 We are taking an interdisciplinary approach by combining laser microsurgery with genetic perturbations, quantitative measurements of the responses and comparison with theoretical models. Understanding the role of bridging microtubules in force generation and chromosome movements will not only shed light on the mechanism of chromosome segregation, but may also increase the potential of mitotic anticancer strategies, as the spindle is a major target for chemotherapy. 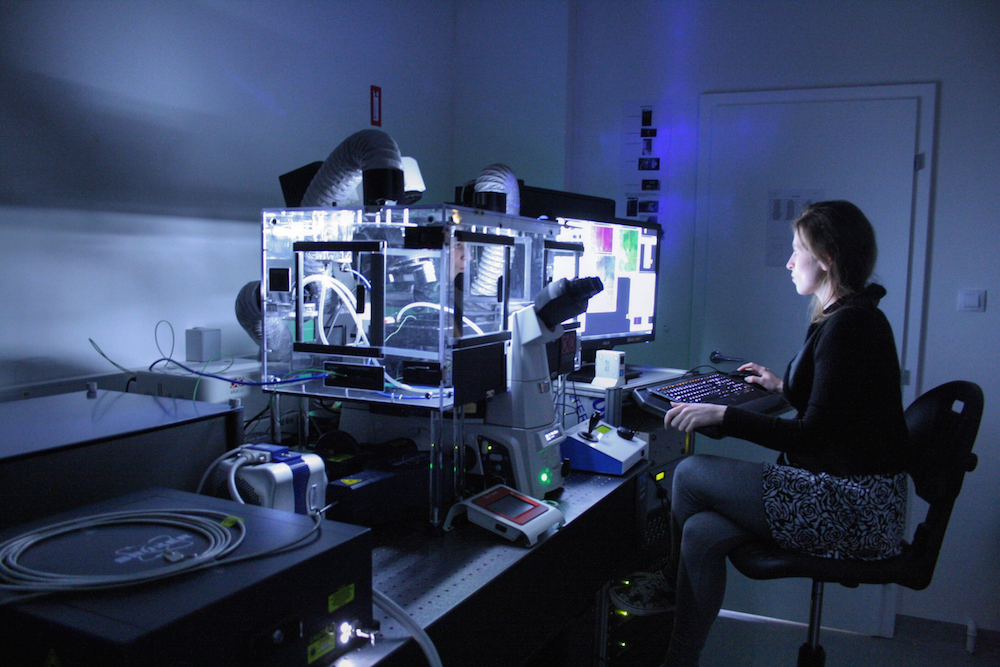 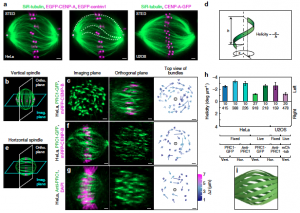 Mitosis relies on forces generated in the spindle, a micro-machine composed of microtubules and associated proteins. Forces are required for the congression of chromosomes to the metaphase plate and their separation in anaphase. However, besides forces, torques may exist in the spindle, yet they have not been investigated. Here we show that the spindle is chiral. Chirality is evident from the finding that microtubule bundles in human spindles follow a left-handed helical path, which cannot be explained by forces but rather by torques. Kinesin-5 (Kif11/Eg5) inactivation abolishes spindle chirality. Our theoretical model predicts that bending and twisting moments may generate curved shapes of bundles. We found that bundles turn by about −2 deg µm−1 around the spindle axis, which we explain by a twisting moment of roughly −10 pNµm. We conclude that torques, in addition to forces, exist in the spindle and determine its chiral architecture. 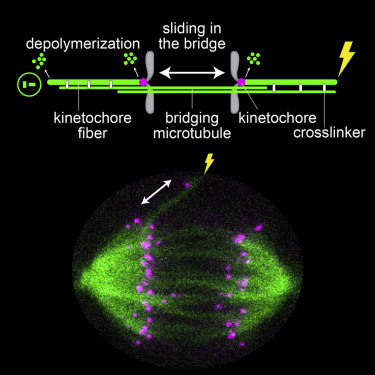 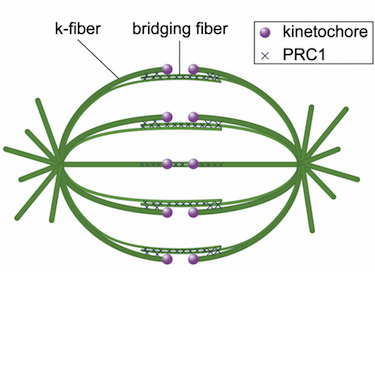 In the mitotic spindle, kinetochore microtubules form k‐fibers, whereas overlap or interpolar microtubules form antiparallel arrays containing the cross‐linker protein regulator of cytokinesis 1 (PRC1). We have recently shown that an overlap bundle, termed bridging fiber, links outermost sister k‐fibers. However, the relationship between overlap bundles and k‐fibers throughout the spindle remained unknown. Here, we show that in a metaphase spindle more than 90% of overlap bundles act as a bridge between sister k‐fibers. We found that the number of PRC1‐GFP‐labeled bundles per spindle is nearly the same as the number of kinetochore pairs. Live‐cell imaging revealed that kinetochore movement in the equatorial plane of the spindle is highly correlated with the movement of the coupled PRC1‐GFP‐labeled fiber, whereas the correlation with other fibers decreases with increasing distance. Analysis of endogenous PRC1 localization confirmed the results obtained with PRC1‐GFP. PRC1 knockdown reduced the bridging fiber thickness and interkinetochore distance throughout the spindle, suggesting a function of PRC1 in bridging microtubule organization and force balance in the metaphase spindle. 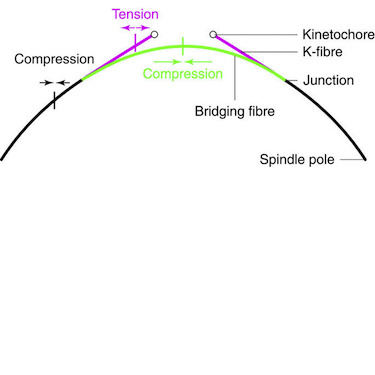 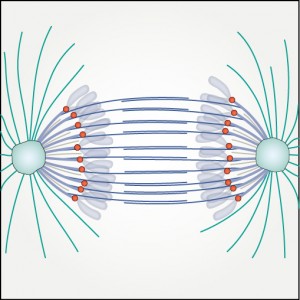 segregation remains one of the most challenging questions in cell division. Even though the duration of anaphase is short, it is of utmost importance for genome fidelity that no mistakes are made. Seminal studies in model organisms have revealed different mechanisms operating during chromosome segregation in anaphase, but the translation of these mechanisms to human cells is not straightforward. Recent work has shown that kinetochore fiber depolymerization during anaphase A is largely motor independent, whereas spindle elongation during anaphase B is coupled to sliding of interpolar microtubules in human cells. In this Review, we discuss the current knowledge on the mechanisms of force generation by kinetochore, interpolar and astral microtubules. By combining results from numerous studies, we propose a comprehensive picture of the role of individual force-producing and -regulating proteins. Finally, by linking key concepts of anaphase to most recent data, we summarize the contribution of all proposed mechanisms to chromosome segregation and argue that sliding of interpolar microtubules and depolymerization at the kinetochore are the main drivers of chromosome segregation during early anaphase in human cells. 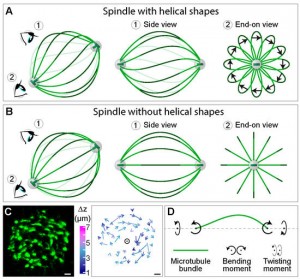 The mitotic spindle segregates chromosomes into two daughter cells during cell division. This process relies on the precise regulation of forces acting on chromosomes as the cell progresses through mitosis. The forces in the spindle are difficult to directly measure using the available experimental techniques. Here, we review the ideas and recent advances of how forces can be determined from the spindle shape. By using these approaches, it has been shown that tension and compression coexist along a single kinetochore fiber, which are balanced by a bridging fiber between sister kinetochore fibers. An extension of this approach to three dimensions revealed that microtubule bundles have rich shapes, and extend not simply like meridians on the Earth’s surface but, rather, twisted in a helical manner. Such complex shapes are due to rotational forces, which, in addition to linear forces, act in the spindle and may be generated by motor proteins such as kinesin-5. These findings open new questions for future studies, to understand the mechanisms of rotational forces and reveal their biological roles in cells. 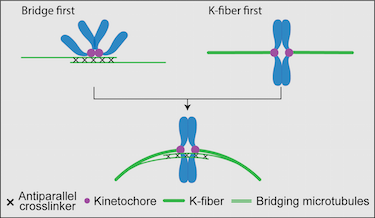 The mitotic spindle performs the task of physically dividing the genetic material between the newly formed daughter cells. To achieve this, bundles of microtubules and associated proteins orchestrate forces that spatially organize and then separate the chromosomes. In the classic view of the spindle, the kinetochore microtubules (k-fibers) are tensed and, thus, straight, whereas interpolar bundles are curved and do not interact with k-fibers close to the spindle equator. The updated view of the spindle depicts k-fibers as curved and interacting with newly identified interpolar bundles, called bridging fibers, along their length. In this Opinion, we propose and discuss scenarios for the origin of this structure in the context of known spindle assembly mechanisms. 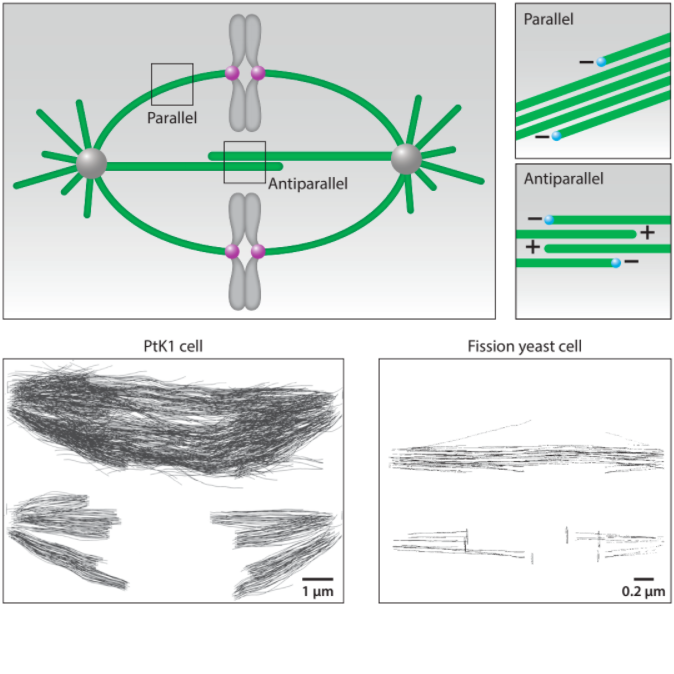 At the onset of division, the cell forms a spindle, a precise self-constructed micromachine composed of microtubules and the associated proteins, which divides the chromosomes between the two nascent daughter cells. The spindle arises from self-organization of microtubules and chromosomes, whose different types of motion help them explore the space and eventually approach and interact with each other. Once the interactions between the chromosomes and the microtubules have been established, the chromosomes are moved to the equatorial plane of the spindle and ultimately toward the opposite spindle poles. These transport processes rely on directed forces that are precisely regulated in space and time. In this review, we discuss how microtubule dynamics and their rotational movement drive spindle self-organization, as well as how the forces acting in the spindle are generated, balanced, and regulated. 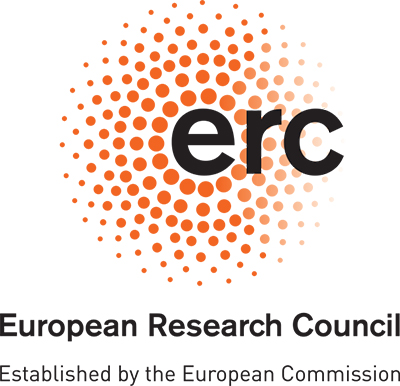 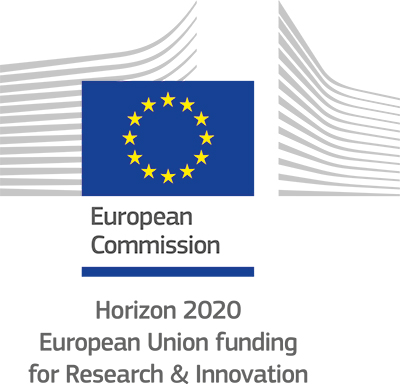